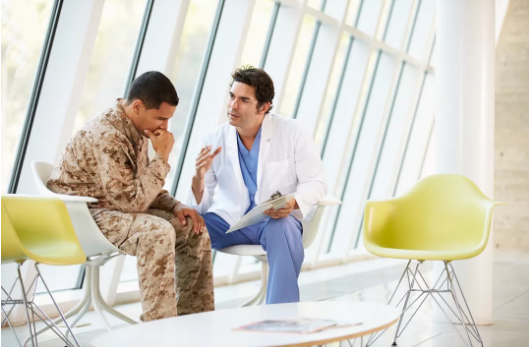 In the context of suicide contagion, here’s the basics of the psychiatry of it all from a trusted source: Pysch Central’s recent article by  John M. Grohol, Psy.D. so that we define what suicide contagion means:

The theory of ‘suicide contagion’ remains controversial among researchers – not just in terms of soldier suicide or veteran suicide – with mixed proof from the scientific research. As Randall et al. (2015) put it:

So the basic question is: Is suicide contagious?  That what suicide contagion says. My short answer is yes. Any time something becomes more familiar to us it’s easer to understand and rationalize. Once Rock Hudson and Magic Johnson came out as having HIV, the rest of us quickly learned more about it and there was a great stigma removed from it. That’s just my opinion.

Just how connected are we, without the internet, to the reality of suicide. Here’s an excerpt from Grohol’s article:

Andriessen et al. (2017) found that 1 in 20 people in any given year know someone in their social network who has died by suicide — and 1 in 5 during an entire person’s lifetime. That means that a significant minority of people will know someone who actually died by suicide. But most of us, myself included, live to talk about losing someone to suicide with others.

And this is without any internet access, this is good old-fashioned hear it from a friend who heard it from a friend. In today’s connected age with Facebook and Snapchat, there has actually been live suicides. Outrageous.

What does this say for the recent contagion theory regarding soldier suicide and veteran suicide? I think in one way it validates it and in another it doesn’t do anything. Is a veteran more likely to commit suicide because one of his kind did? I can’t answer that because it’s so personal. My guess is maybe. There a case to be made for the first follower, but we’re way past that stage.  BTW, if you haven’t seen the linked video of this guy dancing, you should do yourself a favor. More than a leadership lesson, as it’s like to have been painted, but more on people know a good thing when they see it.

I’ve made the case that soldier suicide and veteran suicide are personal choices, and for me, it comes down to more than the individual. It comes down to what we all are doing with those close to us. And by close I mean not just loved ones. I mean those people we see everyday, especially veterans. Here’s the final word from Grohol’s article, and I couldn’t have said it much better, as he can’t either it seems:

And to help prevent suicide? We can do so much more in our own social networks, by keeping in touch with other people’s real feelings. I know, these feelings can often be hard to get to. It’s not easy asking about another’s emotional health. But your concern may be something that a person drowning in suicidal thoughts can latch onto, giving them some hope for the future.

As Roberts wrote, “We, as a society, need to slow down and pay more attention to those around us. We need to listen and not discount what people share with us.”

That’s a tall order in today’s world, the slow down part, but what’s the worst that can happen? 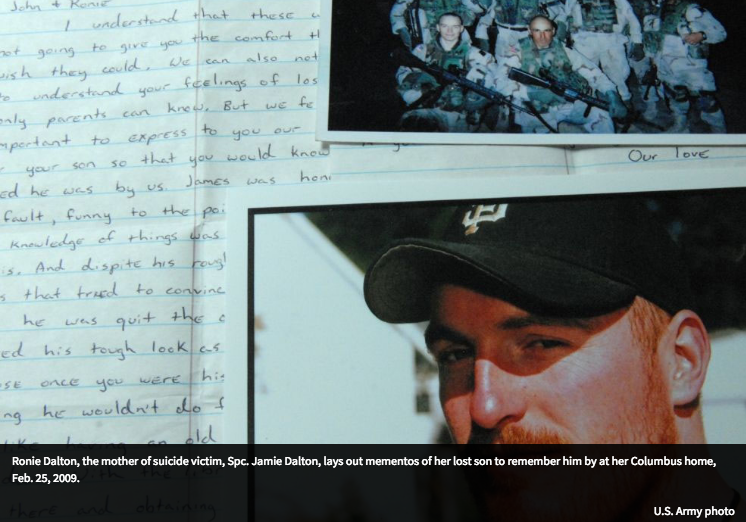 Now that the Facebook social media 22 campaigns have run their course, it’s time to get back to where the rubber hits the road in terms of soldier suicide and veteran suicide. The awareness of the issue has taken a great leap forward thanks to the Facebook campaign, but it does very little in getting to the heart of the problem. In addition to the timeline help, the mainstream media has taken up the mantle of the cause and that’s a good thing. Let’s review some of the attention and what the big takeaways are in them.

One recent article (September, 2017 by  Zoe Szathmary, Fox News) that comes up with a Google search of “soldier suicide and veteran suicide” is from Fox News. Here’s a link and the story was generated from the health news desk and Dr. Manny Alvarez video that accompanies it. The lead was the staggering statistic that we all know about, but put like this:

That’s hard to take. And to Fox’s credit, the story went on to talk about new ideas coming out to help the vets and to get them help. PTSD is the main culprit and much of the aid centers around that illness and how to overcome it, or at least keep it at bay.

Some of the more interesting take-aways for me are that most are male and white. This I wasn’t expecting. And here’s a quote that I want you to see:

Suicide risks for civilians, active and reserve service members are “relatively the same,” Dr. Keita Franklin, the director of the DSPO, said. The average age of civilians at high risk of suicide is older than it is for service members, Franklin explained.

So the risks are the same, but as these white men get older, somehow that risk rises and they find a solution to their pain.

Here’s the next story from recent times:

From Real Clear Defense, also September 2017 comes a deeper look at the numbers and add more to them. Written by  Rebecca Burgess, her well-written look into the “veteran suicide epidemic” makes the case that as a tribe, veteran soldiers are more susceptible to suicide not only because of the hard transition from military life to civilian, but these kinds of things tend to sweep through these tribes.

Social scientists talk about suicide contagion or the “Werther effect.” (from Goethe’s novel about a suicidal Werther, whose publication was followed by a spate of copycat suicides among young men), and they have measurable evidence that suicidal behavior tends to spread person to person through social networks, with effects reaching to three degrees of separation at least. This September, researchers identified the same phenomenon among military members, noting that small military units seemed to have enhanced vulnerability on this score. The strong connections forged by means of the unit mean that each soldier is keenly aware when a fellow soldier has witnessed or been involved in a traumatic event involving wounding or death. Researchers have also found that soldiers who witnessed their peer get wounded or killed, who were unable to help, were especially at risk for suicide ideation and attempts.

As far as reinforcing that soldier suicide is veteran suicide, Burgess does that as well:

But handfuls of recent studies, published in JAMA Psychiatry and elsewhere, reveal that the majority of veterans who committed suicide in the past decade weren’t those veterans who had spent much if any time in Iraq and Afghanistan, weren’t those who had been in combat, (only 10 percent of service members have seen actual combat in these conflicts), and weren’t typically 20-somethings. Third and finally, from Task & Purpose, comes what I think gets to the heart of this terrible epidemic. Written by Adam Lineham and published this September 2017, the headline is: The Suicide Contagion: How The Effort To Combat Veterans’ Suicide May Be Making It Worse

I think that says it all. Lineham goes on to support some of Burgess’ “copycat” mentality that suicide puts forth:

Psychologists have long understood that suicidal behavior is infectious — that the urge to kill oneself can pass from one person to another — and a recent study published in the journal JAMA Psychiatry was the first to conclude that military units are not immune to this phenomenon (known as “suicide contagion”).

Further down in the article, Lineham nails it like the other two recent posts don’t. He says it better than I do, and with much less venom that this writer would deliver:

While recent efforts to raise awareness about the veteran suicide epidemic are rooted in good intentions, and have certainly done much to draw widespread attention to the issue, there’s a crucial footnote that organizations like 22Kill never include on their websites: Awareness-raising campaigns generally don’t work. “We’ve known for over 50 years that providing information alone to people does not change their behavior,” Victor Strecher, a professor at the University of Michigan’s School of Public Health, told New York Magazine in 2014 for an article titled Awareness Is Overrated.

I had my own reasons for founding Once A Soldier, but the above captures a good pieces of it. Once A Soldier doesn’t deal with PTSD, soldier suicide, veteran suicide or any of that. We deal with the families that are the survivors. We don’t add to the media fire that surrounds the magical 22 or help make it seem like the new normal. We are here to come in after the battle is over and clean up a little. We wish all those struggling with their own selves the best, but we leave that to others to try and fix.